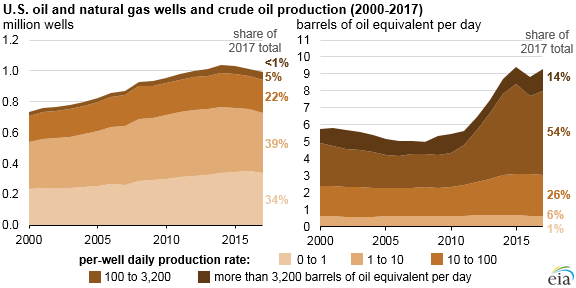 The total number of wells producing crude oil and natural gas in the United States fell to 991,000 in 2017, down from a peak of 1,039,000 wells in 2014. This recent decline in the number of wells reflects advances in technology and drilling techniques. EIA’s updated U.S. Oil and Natural Gas Wells by Production Rate report shows how daily production rates of individual wells contributed to U.S. total crude oil and natural gas production in 2017. 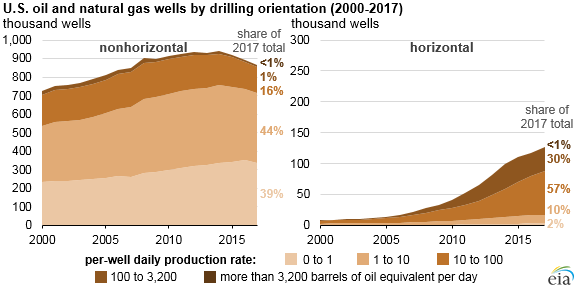 Source: U.S. Energy Information Administration, U.S. Oil and Natural Gas Wells by Production Rate
Note: Nonhorizontal wells include vertical and deviated wells and wells for which the type is unknown.

In EIA’s report, wells are grouped into 26 production volume brackets, ranging from less than one barrel of oil equivalent per day (BOE/d) to more than 12,800 BOE/d. Most of the U.S. oil and natural gas production comes from wells producing between 50 BOE/d and 1,600 BOE/d. In 2017, wells within this range accounted for 9% of the overall count of wells but 62% of crude oil production and 63% of natural gas production.