By Liam Denning – (Bloomberg Opinion) — A big deal in the Permian basin should be cause for fanfare in oil and gas circles. And yet, a distinct sad-trombone note sounds as Carrizo Oil & Gas Inc. falls into the arms of Callon Petroleum Co. 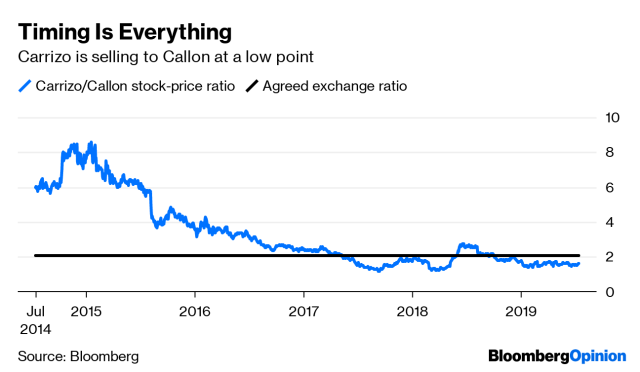 Callon is offering a 25% premium in an all-stock acquisition, based on Friday’s closing prices. But it’s the absolute price that tells the real story. Carrizo is selling out for $13.12 a share, getting it back to where it traded just less than three months ago – and way below the $23 level where it sold a slug of new shares last August. If Callon is engaging in some bottom-fishing, Carrizo is nonetheless grabbing eagerly at hook, line and sinker.

Carrizo’s decision to sell with its stock trading close to its lowest levels in a decade is the salient fact here. It is being paid with stock and its shareholders will own 46% of the enlarged Callon, so they can participate in any gains once the deal is done. They’re better off not looking too closely at their screens on Monday, though: Callon’s stock slumped by as much as 17% Monday morning, wiping out the implied premium.

Even so, there is a compelling logic to shale consolidation. A decade of breakneck expansion has left the onshore U.S. exploration and production business overcapitalized, with a long tail of inefficient smaller companies offering lackluster returns (see this). Carrizo is a prime example. Its total return over the past five years is negative 84%, which makes the sector’s negative 64% look good (the S&P 500 has returned a positive 69% in that time). Indeed, activist firm Kimmeridge Energy Management Co. tried last year to nudge the company into streamlining or selling itself to address this. Carrizo, which was trading at about $17 a share back then, disagreed.

It is telling that up to $45 million of Callon’s synergies target relates to cutting general and administrative overhead. That is equivalent to more than two-thirds of Carrizo’s G&A line, reinforcing one of Kimmeridge’s lines of argument about the inefficiency inherent in such a fragmented industry.

Those cash savings also speak to the other key point in Callon’s marketing push, namely an implied free cash flow number north of $200 million in 2020. Based on Callon’s current price, that implies a pro forma free cash flow yield of about 10%, which may be enough to tempt some investors back into the stock when the smoke clears – although pro forma net debt of two times Ebitda (including synergies) means some of that will have to go toward reducing leverage.

Proving those synergies work and that free cash flow will actually find its way to shareholders is Callon’s main task now. The company hasn’t had a single year of positive free cash flow since 2010, according to figures compiled by Bloomberg. And its own total return has been negative 41% over the past five years – better than Carrizo but still far to the wrong side of zero.

That is the problem with E&P as a whole. Carrizo will hardly be missed by investors, and wringing out some costs would be a good thing. Yet the very fact that Carrizo has chosen to take this price at this time, rather than the usual E&P playbook of banking on the next upswing, says a lot.

To contact the author of this story: Liam Denning at ldenning1@bloomberg.net

To contact the editor responsible for this story: Mark Gongloff at mgongloff1@bloomberg.net

Liam Denning is a Bloomberg Opinion columnist covering energy, mining and commodities. He previously was editor of the Wall Street Journal’s Heard on the Street column and wrote for the Financial Times’ Lex column. He was also an investment banker.

For more articles like this, please visit us at bloomberg.com/opinion