Chesapeake Energy (CHK) announced last week its exit from the Mississippian Lime, the play that the company helped to pioneer several years ago. Chesapeake received an estimated $1,000 per acre for its Miss Lime acreage, excluding production.   The $0.5 billion price tag received for the properties is viewed as a success for Chesapeake.

OIL ANALYTICS views the price received as reasonable and the transaction as a positive, albeit hardly material, development for the stock.

Given the improvement in oil prices, Chesapeake is likely to put additional asset packages in the Mid-Continent on the auction block.

In three separate transactions, Chesapeake is selling ~238,000 net acres, including interests in 3,000 wells that are currently producing 23,000 barrels of oil equivalent per day net to Chesapeake. Oil represents ~25% of the production mix.

It appears that the acreage being sold mostly corresponds to the purple Miss Lime contour on the map below. As a reminder, Chesapeake has a 50/50 joint venture with Sinopec in the area. 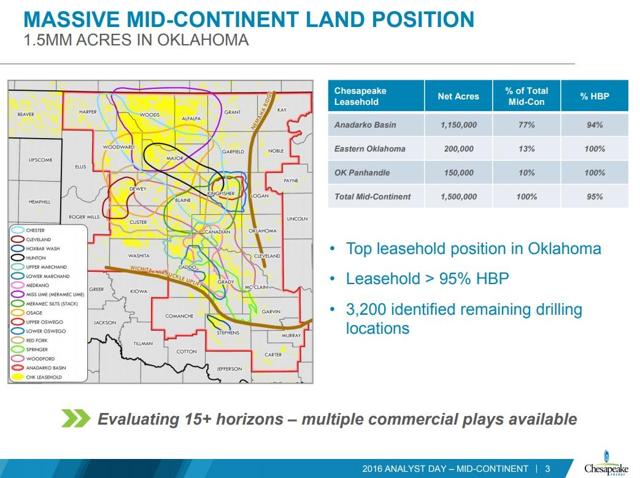 The disclosed production metrics indicate that the vast majority of the wells being sold are stripper wells. Indeed, based on our estimate of Chesapeake’s average working interest in the properties of ~39% and average royalty burden of ~15%-20%, average oil production per well comes out at around 6 barrels per day. Given that some wells were put on production recently and have substantially higher current production rates, the average rate for older vintage wells is probably in the 3-5 barrels per day range.

Please note that not all of the 3,000 wells on the properties are Miss Lime wells. In fact, we estimate that Miss Lime wells represent less than one-quarter of the total count, with the balance being mostly legacy vertical wells. The Miss Lime wells are depicted on the map below by the dense cluster of blue dots in Alfalfa and Woods Counties. 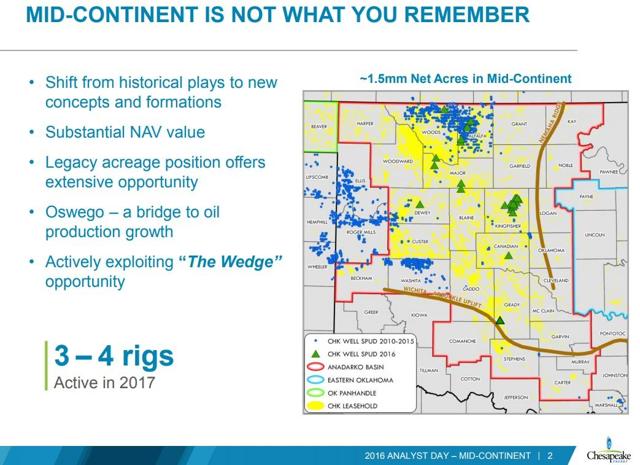 So why are the buyers willing to pay half a billion dollars for properties that are producing less than 5,000 barrels of oil per day, have been extensively drilled and have a high operating cost?

Several factors could be the reason:

Assuming that the market value of the existing production is $250 million, the price received for the acreage is $1,000 per acre. We note again that the acreage has been significantly exploited. While several new play concepts have been advertised by Chesapeake and its peers, the success of those new plays is yet to be demonstrated. In this context, the price per acre received is quite reasonable. Given Chesapeake’s existential priority to reduce its leverage via asset sales, the outcome is a positive for the stock, in our view.

At its Analyst Day in 2016, Chesapeake highlighted its Miss Lime assets as “continuing to deliver” and having “tremendous future optionality.” In reality, however, Chesapeake’s net oil production from its Miss Lime asset has declined by one-half since 2014 (based on OIL ANALYTICS’ estimate) – far more than any other major asset in the portfolio. The decline indicates that the asset could not compete for capital the same way other assets could, despite the massive installed operating infrastructure. 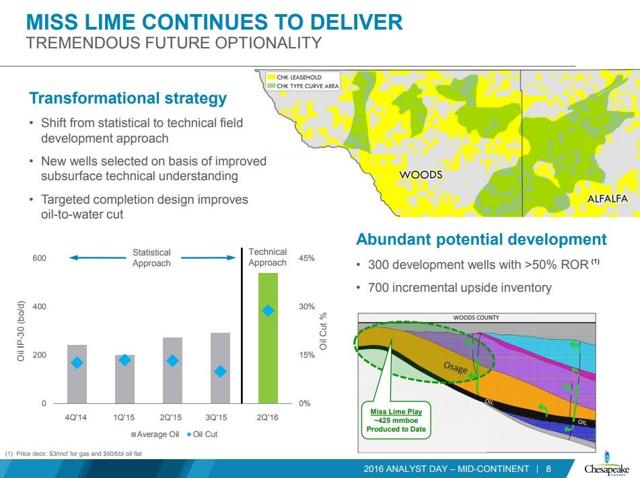 There is no dispute that the Anadarko Basin – even in its northern shelf area – is a prolific oil producing province and some future upside from the acreage should not be discounted. That said, the going price for the acreage in this area speaks volumes about the industry’s risk/reward perception.

Following the divestiture, Chesapeake’s acreage position in the Mid-Continent remains massive and appears to be a logical component of the company’s asset monetization bank. Piece-by-piece divestitures appear to be most likely.