Shares of Anadarko rose 31% in the premarket trading following the news. Chevron shares were down 4.2% from Thursday’s close of $125.99 a share.

Chevron’s deal values Anadarko at $65 per share, a 37% premium to its Thursday close. Based on Anadarko’s closing price of $46.80 on Thursday, Anadarko shareholders will receive 0.3869 shares of Chevron and $16.25 in cash for each Anadarko share. Chevron will assume $15 billion of Anadarko’s debt.

The deal represents the 11th biggest ever for an energy and power company, according to Refinitiv.

“This takes a great company and makes it even better,” Chevron’s Chairman and CEO Michael Wirth told CNBC’s “Squawk Box ” immediately after the news broke. “As our company has strengthened its financial situation over recent years, we’re always looking to make our portfolio even stronger.”

Wirth sees $65 per share as a “fair price” for Anadarko. Wirth, who assumed his role in February 2018, expects the deal will allow Chevron to “win in any environment,” playing to the company’s strengths in shale, deep water and natural gas. He said the company expects the deal to create over $1 billion in synergies.

Chevron will have greatly expanded access to assets as a result of the combination. The deal comes as oil majors like Chevron and Exxon Mobil look to carve out a dominant position in the Permian Basin, the largest U.S. shale field and the driver of a boom in American oil production.

The companies say the deal creates a 75-mile corridor across the Delaware basin portion of the Permian. Stringing together continuous acreage allows companies to more efficiently carry out the advanced drilling methods needed to produce shale oil and gas.

That is at the heart of Chevron’s Permian strategy. The company is bringing industrial scale to shale drilling, once the domain of small, independent wildcatters.

Both companies are also offshore players in the Gulf of Mexico. Anadarko currently operates 10 offshore facilities in the Gulf, which Chevron says will enhance its presence in the region.

Chevron says it sees opportunities for tie-backs to Anadarko assets in the Gulf, which involves connecting offshore fields to existing infrastructure. Drillers have increasingly turned to the low-cost strategy to avoid the massive expense of building multi-billion dollar deepwater platforms.

The deal gives Chevron a stronger foothold in the African liquefied natural gas market. Anadarko plans to build one of the world’s largest LNG export facilities in the world in Mozambique, leveraging huge natural gas reserves from nearby offshore fields.

Chevron has deep experience developing LNG operations. The company is behind the massive Gorgon and Wheatstone projects in Australia and has a stake in the Angola LNG. 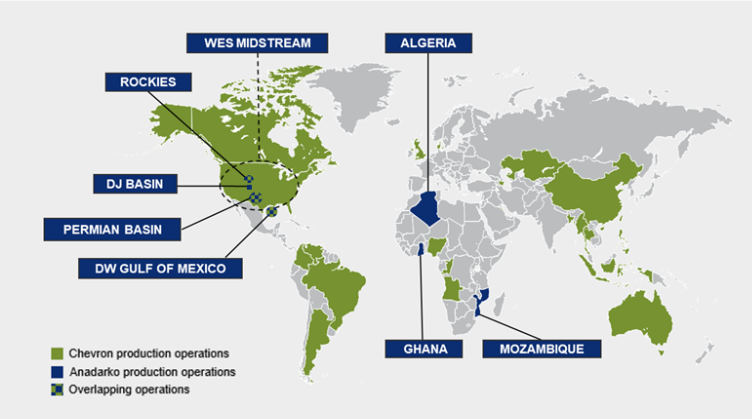 Demand for LNG — natural gas chilled to liquid form for transport by sea — is soaring as countries like China aim to meet their energy needs with gas, which.

The deal, which is subject to shareholder and regulatory approval, is expected to close in the second half of 2019. If approved, Chevron said, it plans to boost its annual share buyback program to $5 billion from $4 billion.

“This transaction will unlock significant value for shareholders, generating anticipated annual run-rate synergies of approximately $2 billion, and will be accretive to free cash flow and earnings one year after close,” Wirth said in the company’s release.

Anadarko Petroleum stock has risen 6.8% this year, compared with a 17.6% increase in the S&P 500 Energy index over that period.