Hart Energy –Devon Energy Corp. (NYSE: DVN) launched plans on Feb. 19 to complete its transformation into a high-return U.S. oil growth business including the possible sale or spin-off of its Canadian and Barnett Shale assets.

“With our world-class U.S. oil resource plays rapidly building momentum and achieving operating scale, the final step in our multi-year transformation is an aggressive, transformational move that will accelerate value creation for our shareholders by further simplifying our resource-rich asset portfolio,” Dave Hager, Devon’s president and CEO, said in a statement.

In May 2017, Devon launched its “2020 Vision”—a strategic turn away from growth at any cost—with a focus on delivering “top-tier returns” to investors. As a result, the company set a $1 billion sales target and began shedding noncore assets, including divestitures in the Eagle Ford and Delaware Basin. 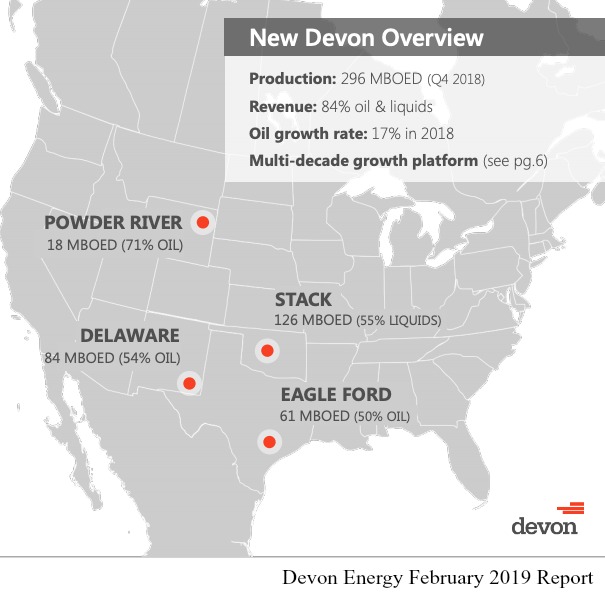 Devon expected to exceed its original $1 billion divestment target within a year to 18 months and eventually bumped up its asset sales goal to $5 billion.

With the steps announced on Feb. 19, Devon expects its U.S. oil business to generate 13% to 18% oil growth in 2019, with 10% less upstream capital than 2018, and is self-funded at $46 oil prices, assuming flat service and supply pricing relative to 2018, according to the company press release.

“New Devon will emerge with a highly focused U.S. asset portfolio and has the ability to substantially increase returns and profitability as we aggressively align our cost structure to expand margins with this top-tier oil business,” Hager said. “The New Devon will be able to grow oil volumes at a mid-teens rate while generating free cash flow at pricing above $46 per barrel.”

Further, the company said the “New Devon” has operating margins that are 57% above the total company average in 2018 and has demonstrated well productivity that has exceeded the industry average by roughly 40% over the past three years.

With Devon’s new, narrowed focus as a U.S. oil business, the company is committed to aligning the cost structure by taking steps to deliver at least $780 million in sustainable annual cost savings by 2021.

On Feb. 19, Devon said its board of directors authorized a $1 billion increase to the company’s previously announced $4 billion share-repurchase program, bringing the total repurchase program to $5 billion.

Devon also reported a better-than-expected quarterly production on Feb. 19, aided by more output from its U.S. shale assets, according to a Reuters report.

The company reported production of 532,000 boe/d in the fourth quarter ended Dec. 31, while analysts had expected 527,060 boe/d, according to IBES data from Refinitiv.

The Oklahoma City-based company expects to complete the separation of its Canadian and Barnett Shale assets by the end of 2019. The company has hired advisers for each asset, and data rooms for the Canada and Barnett are expected to be open by second-quarter 2019.

Devon Energy said it anticipates using potential proceeds from the separation of these assets to maintain target debt levels of one to 1.5 times EBITDA and to continue share repurchase activity.

Emily Patsy can be reached at epatsy@hartenergy.com. Reuters contributed to this article.