The number of Drilled but Uncompleted Wells (DUC’S) sank to its lowest level ever recorded, according to the Energy Information’s latest Drilling Productivity Report published on Monday.

MINERAL OWNERS: DON’T sell your mineral rights until you talk to an Expert for FREE

The number of Drilled but Uncompleted Wells—also known as DUCs—fell to 4,273 in March 2022, according to the latest figures. This is down from 42% since the beginning of 2021. 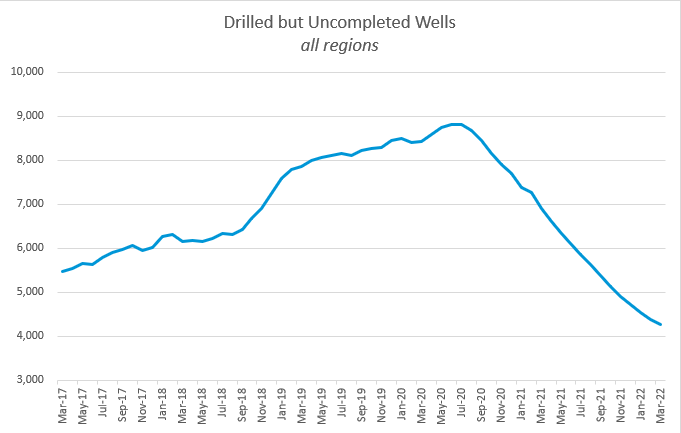 The falling DUC count is due to more fracking than drilling—depleting their DUC inventories rather than drilling new wells is typically more cost-effective. As shareholders continue to demand great fiscal restraint even in today’s higher oil-price environment, DUCs would naturally be favored.

With more than 4,000 DUCs still active, it may seem like there is little cause for concern, even with losing nearly 50% of the DUC inventory since the beginning of last year. But that DUC count has long been debated. Not due to the accuracy of the figure itself, but because wells that remain in the uncompleted phase for more than two years are considered dead DUCs.

Most analysts agree that 95% of all wells drilled are completed during the first two years. That means any wells still left uncompleted after that time are extremely unlikely to be completed—ever.

Back in June of last year, Rystad Energy estimated that the total number of live DUCs was just 2,380—that was when the EIA had estimated the overall DUC count was more than 6,100. Since then, the total DUC count, per the EIA, has dropped by 1,827, or 30%. Assuming that the majority of those that were completed were live, that leaves U.S. shale with precious little to frack.

The method with which the EIA calculates DUC wells has been called into question well before the dwindling fracklog.

By Julianne Geiger for Oilprice.com