From OilPrice.com, via Yahoo News. The energy crisis in Europe is not only disrupting businesses and household finances, but it’s also hitting at the heart of crucial scientific research and experiments that require power to run.

The European Organization for Nuclear Research, CERN, the world’s largest particle physics lab and home of the Large Hadron Collider, could shut down some accelerators and could even idle the LHC to ensure grid stability in the nearby French and Swiss regions amid the severe energy crisis in Europe, Serge Claudet, chair of the CERN energy management panel, told The Wall Street Journal.

Large European industrial companies have already announced plant or production line closures due to soaring gas and energy prices, while governments in Europe are drafting plans to potentially ration gas supply to industries according to their specific priorities.

The crisis became much worse at the end of last week, when Russian gas giant Gazprom said after three-day maintenance on Friday that Nord Stream would remain shut until “operational defects in the equipment are eliminated”, upping the ante in its gas war against Europe.

For most governments in Europe, the indefinite suspension of Russian gas flows through the main pipeline to Germany wasn’t a surprise; they had expected such a move from Putin. But this doesn’t make the EU’s task of ensuring lights and heating on this winter any easier. Switzerland and France – whose grids CERN uses to power its supercollider and seven other particle accelerators to study matter and two decelerators to study antimatter – are among the worst hit. 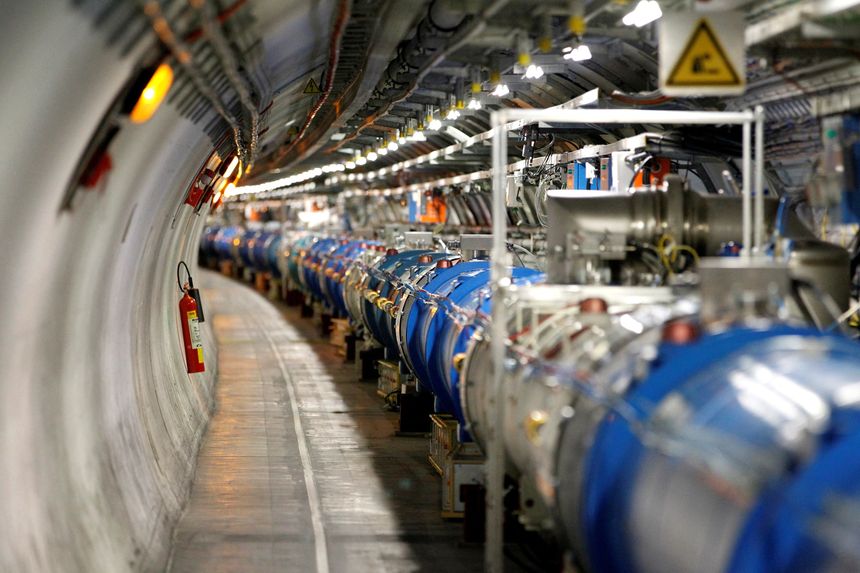 The Large Hadron Collider, the world’s largest particle accelerator, consumes a third as much power as the nearby city of Geneva when it is at peak operation. PHOTO: PIERRE ALBOUY/REUTERS

Switzerland has admitted that the country might have to resort to using oil for electricity generation this winter as Europe is dealing with low levels of Russian natural gas supply, which could be cut even further or cut off altogether.

In France, year-ahead power prices surged to $1,001 (1,000 euro) per megawatt-hour for the first time ever last month. French power prices have now soared tenfold over the past year, as drought and hot weather this summer have added to France’s nuclear power generation problems at the worst possible moment. EDF will restart all its nuclear reactors in the country this winter, French Energy Transition Minister Agnès Pannier-Runacher said last week. Currently, more than half of EDF’s reactors are out of operation either because of maintenance or technical issues.

One of EDF’s largest clients is none other than CERN, which uses 1.3 terawatt hours of electricity annually. That’s enough power to fuel 300,000 UK homes for a year. At peak consumption, usually from May to mid-December, CERN uses about 200 MW, which is about a third of the amount of energy used to feed the nearby city of Geneva in Switzerland.

May to mid-December is the period of active work at the Large Hadron Collider, the world’s largest and most powerful particle accelerator, which discovered ten years ago the existence of the Higgs boson that gives mass to the elementary particles. The collider was just restarted this July after a three-and-a-half-year hiatus for upgrades.

However, due to the energy crisis, CERN is now considering how it could idle the world’s most powerful collider.

“Our concern is really grid stability because we do all we can to prevent a blackout in our region,” Claudet told the Journal.

RELATED: Energy Markets Will Determine The Fate Of The Euro

CERN and its power supplier, EDF, are now discussing the possibility of implementing daily warnings for power grid instability at the research complex to determine when it would need to conserve energy and use less electricity, the head of CERN energy management panel told the WSJ. The organization will shut down other accelerators first, before possibly having to resort to a shutdown of the world’s largest particle accelerator, he added. With the shutdown of some of the other accelerators, CERN could thus lower its power use by 25%.

By Charles Kennedy for Oilprice.com