By Marione Martin, The Alva Review-Courier –The future of oil production in Woods and nearby counties lies in keeping costs low to maximize return, according to Tom L. Ward, CEO of Mach Resources, LLC, an Oklahoma City-based oil and gas company. Tom Ward spoke during the annual Woods County Mineral Owners meeting June 27 in Alva. The meeting was held at Northwest Technology Center.

Tom Ward described his ties to this area. He and his wife, Sch’ree, had their first date in Alva “when we were both very young. She was from Waynoka, and I was from Seiling We’ve spent a lot of time in western Oklahoma, a lot of time in Alva, and a lot of time in Woods County. We’ve been married now 41 years, and we’ve spent a good amount of time in and around Waynoka with her family and friends. It’s good to be back.”

He said Mach has a field office in Waynoka, the former Chesapeake office. From 1989 until 2006, Tom Ward was president, chief operating officer, and a director of Chesapeake Energy, which he co-founded with Aubrey K. McClendon. He was CEO of SandRidge Energy, Inc. from June 2006 through June 2013 so he is familiar with the SandRidge office in Alva.

Oil and Gas Assets in the Area

“We have about 260,000 net acres in Harper, Alfalfa, Woods and Barber counties,” said Ward. He said Mach was closing on some assets in Barber County, Kansas, the next day. Showing a slide of a map, he said, “We produce about 23,000 barrels a day and we have 861 gross operated wells. It’s a fairly large operation we have. It’s all set around this map with the saltwater disposal system.”

Mach, which was launched in 2017, started out with investments from Chesapeake in Woods and Alfalfa counties and added more from Shell. Including the non-operated interest in SandRidge, “there’s over $1.3 billion invested in this whole system throughout this area,” he said.

He explained why so much was invested in the disposal system.

In the late 1990s but mostly in the early 2000s, oil and gas prices were very high, he said. This caused the industry to look for ways to find oil and gas that hadn’t been found before. He said that’s when the “shale craze” began, explaining that limestone was put into the class called shale.

“I always knew there was a lot of oil left to be found in Woods and Alfalfa counties when we were with Chesapeake, but we didn’t ever want to drill in this particular zone of the Mississippi Lime because of how much water is produced.”

He said the amount of water produced out of the formation is about 92 percent with oil and associated gases accounting for only eight percent. “In order to drill and complete a well in this area, you have to have access to a disposal well because if you try to truck off that water, you spend more money trucking water than what the well is worth,” he said. “Having that infrastructure in place is critical to being able to get a well drilled.”

But having a disposal system in place is only part of the picture. “As (oil) prices come down we even have to look at ways inside of this to cut our costs to be able to drill new wells and have a rate of return,” said Tom Ward. “The way we look at this is we don’t have to pay very much for acreage because most of this is owned by production, and we’re trying to come in and drill increased density wells.” The more wells they get with the existing disposal system, the better their chances of making money on the investment. He said they have two drilling rigs currently working in the area. “That’s how come we can be successful in the Mississippi Lime where other operators aren’t.”

Tom Ward said Mach has drilled 58 of the last 64 wells in the area. “Mach bought our acreage from Chesapeake in early 2018, March 2018, and since that time there have only been 64 wells drilled across this entire map,” he said. “That is because we have the infrastructure in place. Also at Mach, we pride ourselves on spending about $1.9 million per well when we drill a well. The nearest operator to us in cost is about $2.6 million and the second nearest is about $3 million per well, and that’s all public information.

“That difference between $3 million and $1.9 million is the whole present value of the well. So in other words, if you drill a well and spend $3 million, you won’t make any money over the life of the well. If you drill one that costs $1.9 million you can actually make a decent rate of return. And we call decent in the range of 25 to 50 percent internal rates of return on our drilling program.”

Tom Ward referenced a speech he made to the Alva Rotary Club in the spring of 2015. “I spent an hour describing (oil) prices that were in the mid-50s, and they had been at a hundred, and if I remember correctly I said something like don’t worry, the rain will come. Ultimately things would get better.’

“We were going through a trough,” he said. Unless prices moved up to above 65 to 75 dollars a barrel, oil couldn’t be produced in Oklahoma or the U.S. for that matter. “Things did get a little bit better over time, and post 2014 we’ve had a recovery but since that time, we’ve also had a time of lower prices.”

Looking back across his career, Ward said the early 1990s was the last time the oil and gas industry has had to live within their cash flow. “Most oil and gas companies look for growth and so long as you have good oil and gas commodity prices you can plan out in the future, you can grow earnings, but you also are able to raise that equity around that. With those scenarios, you have ample opportunities to increase rig count and move forward with a growth story.”

Tom Ward explained, “Today the equity markets of companies are declining, the access to capital – both the equity market and the debt market – has dried up, and that’s forcing companies to stay more within their cash flow. So what you have to do, if you want to drill within cash flow, is you have to reduce your rig count. And that’s what’s happening in Oklahoma. I don’t think we’ve even started yet to see the problems that are coming from that.”

The Scoop and the Stack Plays

Oil and gas drilling has been active in other parts of Oklahoma. Ward said, “The places that have drilled the most and are active today are across two plays called the Scoop and the Stack. Those are also the plays from Stephens County, Oklahoma, up to Kingfisher County where we’ve also seen the most investment. Billions and billions of dollars since 2014 have been funneled into Oklahoma to fund these plays, mainly from private companies.

“Private operators even now have approximately half of the rigs running in Oklahoma. So those same private operators have been the ones investing the most money. They’re called private equity companies. Each of these companies has invested a tremendous amount of money into this area of southern Oklahoma and northern Oklahoma in the Scoop and the Stack.

“They usually have about a five-year investment span and it’s starting to dry up, so we’re just now starting to see a retraction in the amount of capital that they’re giving their companies. They’re starting to merge their companies together that were formed and they’re taking away capital to drill. So we’re seeing rig counts go down. And I don’t think that’s going to change. In fact, I think it’s going to accelerate.”

He said one year ago seven companies – Alta Mesa, Roan, SandRidge, Chaparral, Midstates, Jones and Gastar – had a combined equity value of over $7 billion in the area. Ward said, “Today that’s around $800 million. So just in those seven small public companies, there’s been $7 billion depleted. We’re also seeing that in private companies. Especially if you went out and you paid a whole bunch of money for leases and then you have to go drill those leases in order to have any growth.”

“So what we tried to do is in 2015 we started looking for places where we could buy cash flow. And we try to stay within that cash flow and drill out our locations,” said Ward. “That’s why we’re healthy and that’s why it’s actually a good time for Mach Resources as others are starting to suffer. Our goal is basically to own all the Mississippi Lime.

“So our goal from Mach’s standpoint, and my goal personally is to grow in northwest Oklahoma, to grow specifically in areas that other people find difficult to operate in.”

Displaying a slide of fluctuating oil prices in the recent past and projected into the future, Ward said, “You can see today that we’re close to $60, but the difference is the future price curve is fairly flat. So you can’t really bet and Mach can’t really hedge like we could five or six years ago. If you had $60 front crude the back might be $70 or $80. You could buy something, hedge into the future and drill into that curve. Today you can’t do that.”

He said the gas market is even worse going down from $13 in 2008 to about $2.30 today. “I personally think that buying natural gas assets is a good place to buy today because you almost have a free call option on the future of natural gas even if it only moves up to $3. If you look out on the futures curve of natural gas you see it moving up so it’s not as flat as oil. But not until out in 2030 do you get to where you can average $3.00 an MCL,” he said.

Natural gas produced with oil isn’t much help. Tom Ward said, “The other problem we have as mineral owners is we don’t get paid very well on what we call basis, no different than wheat basis. The natural gas we sell from the tailgate of a plant has to be sold on further and now today instead of getting 20 cents on Panhandle Eastern, they’re charging us 85 cents to get rid of the gas. So it’s just another price we have to take and factor into whenever Mach drills a well.

“So today we have to almost entirely put our economics on oil. Gas is merely a byproduct of anything we sell. Luckily there are some liquids inside the gas that helps us but the liquids market has also been depressed the last few months.”

“So all that is to say we believe times are going to get hard and more hard, tougher than I’ve seen in probably the last 20 years,” said Ward. “I think it’s coming fairly fast. I think in the next few months there will be companies that either have to fail, or they have to sell their assets back to their first lienholder which is the banks. 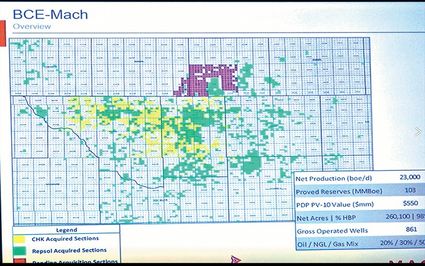 This map shows Mach Resources’ assets in the area. The purple areas are the most recent purchase in Kansas.

“The last two deals we bought, other than the latest one in Kansas, the last two deals we dealt with the banks, the first lienholders instead of the equity owner. The company comes with no equity left. Those kinds of transactions haven’t happened since the bank crisis of the early 1980’s, and we know what that was like.

“I don’t know how long of a time period to project we might go through this, but I think from a producer’s standpoint a person better be prepared to have some cash flow and live within that cash flow, no different than a household has to, in order to survive. And that’s something different than what our industry has done in the last 20 years.”

A video of Ward’s entire speech along with the question and answer session that followed may be seen below.