DAYTON, Ohio (WKEF/WRGT) — While many people are hoping that 2021 will change a lot of what happened during 2020, but one thing that seems to remain unchanged is the national gas price average, which has been holding steady at $2.25 for the last 12 days.

The low demand for gas along with consistent crude oil prices in late December (about $47-48bbl) is credited for the pump gas price stability. In fact, the Energy Information Administration (EIA) recorded that gasoline demand in the U.S. was at the lowest level for the last week of December in 23 years (since 1998) at 8.1 million b/d.

“Holiday road travel was down at least 25%. With fewer people on the road, the majority of states saw little change at the pump from the last week of 2020 to the first few days of 2021,” said Kara Hitchens, AAA spokesperson.

This year has shown the largest year-over-year difference at the beginning of January since 2015, with gas prices already 33 cents cheaper than they were at this time last year. This is despite the national gas price average rising about nine cents in the past month.

AAA says that the demand is likely to dwindle as the year progresses, and gas prices are likely to go down even farther, especially if crude oil holds at the current price point.

Crude oil prices along with supply and demand will have a large influence on how high or low gas prices will go as the year progresses. As the COVID-19 vaccine becomes more widely available and states loosen travel restrictions, AAA expects that Americans will begin to drive more. “At that point, we will see an impact at the pump,” it predicts. 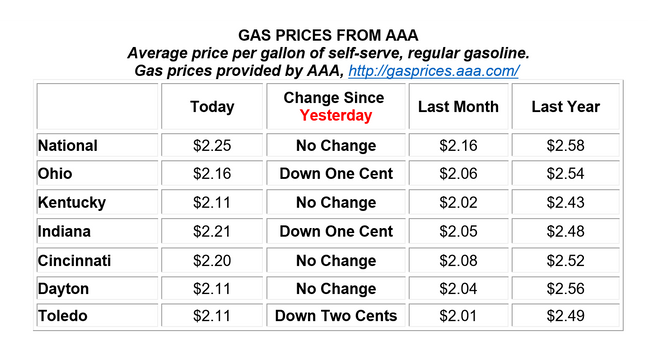