By Jordan Blum – Houston Chronicle – Some of the top oil producers in the booming Permian Basin reported mixed financial results last week as they seek to appease Wall Street with reined in spending and stronger oil and gas production volumes.

A lot of the top Texas independent shale players are feeling the crunch with subdued oil prices and Wall Street now demanding more efficient spending and stronger cash flow after years of companies spending big in order to grow.

Midland-based Diamondback Energy, Dallas’ Pioneer Natural Resources and Austin’s Parsley Energy all said Tuesday that they’re lowering the top end of their 2019 capital spending projections while achieving oil and gas production volumes above or near the top of their guidance. 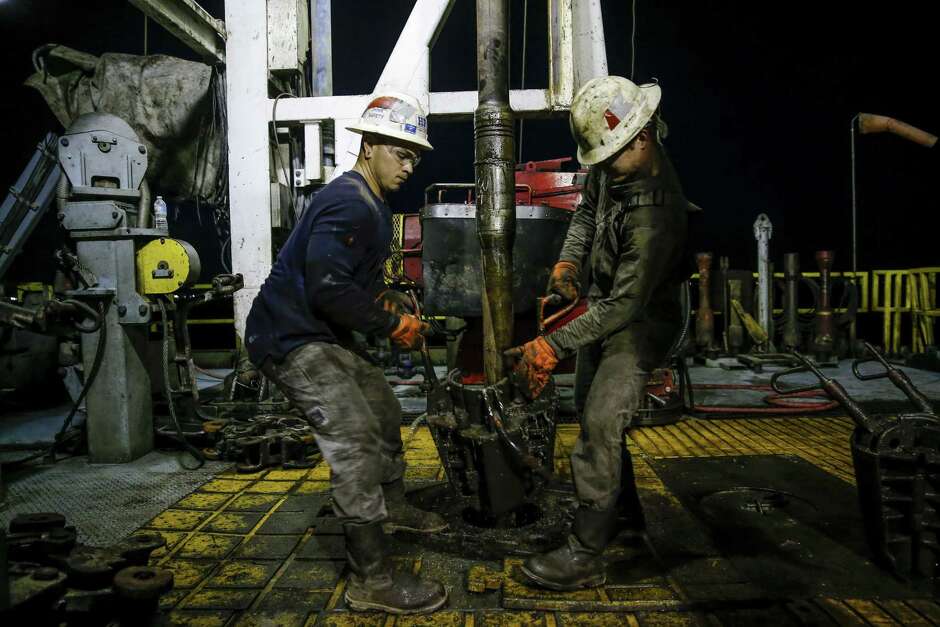 Helmerich & Payne motor man Michael Palmer, left, and floor hand Travis Palmer, right, move equipment as a section of pipe is drilled into the ground for oil and gas extraction on a Diamondback Energy lease Wednesday, Sept. 14, 2016 outside of Midland.

Diamondback, one of the fastest-growing Permian firms after making a series of multibillion-dollar acquisitions last year, reported a quarterly net income of $349 million that jumped nearly 60 percent from the year prior.

After acquiring smaller Permian firms Energen and Ajax Resources last summer, Diamondback essentially doubled its quarterly revenues up to more than $1 billion. The company will complete more wells in 2019 than its previous estimates while lowering the maximum of its capital budget.

The snake-themed Diamondback is reducing its debt load by spinning off its pipeline and processing facilities into the brand-new Rattler Midstream Partners business and by selling more of its mature acreage to its oil and gas minerals business Viper Energy Partners.

Dallas-based Pioneer, on the other hand, is aiming to right the ship after replacing its chief executive and cutting more than 500 jobs this year.

Pioneer posted a $169 million loss in the second quarter, which is down from a $66 million profit a year prior. But much of that loss comes from about $150 million in one-time restructuring costs associated with the job cuts.

In May, Pioneer became a Permian pure-play firm by selling its Eagle Ford assets in South Texas to Houston startup Ensign Natural Resources for about $475 million.

Pioneer CEO Scott Sheffield said the company’s production output is above guidance thus far for the year and that it is lowering the top end of its 2019 capital budget by $150 million, or nearly 5 percent.

The company plans to maintain operating up to 23 drilling rigs in the Permian for the rest of this year.

Austin-based Parsley said it will scale back from 12 rigs in the Permian to 11 because its drilling efficiency is on the rise.

Parsley’s quarterly profit of $116 million was down slightly from $119 million last year, but its revenues jumped from $468 million to $499 million.

As the other companies reported, Parsley is hiking its 2019 production targets while tightening up its capital spending slightly.