(Bloomberg Opinion) — U.S. crude oil production is on track this year to blast through the all-time annual record of 3.52 billion barrels set in 1970. Natural gas production, which broke its 1973 all-time record in 2011, is after a dip in 2016 back on record-breaking pace as well.

Employment in the oil and gas industry, though, isn’t setting any records at all. It probably peaked back in the early 1980s. That is, there were 75 percent more jobs in oil and gas extraction in 1983 than there are now, but the Bureau of Labor Statistics doesn’t report employment in support activities for oil and gas operations — which is where most of the sector’s jobs are — going back that far. In any case, combined employment in the two categories is 20 percent lower than it was four years ago, while oil production is up 25 percent and natural gas production up 19 percent. 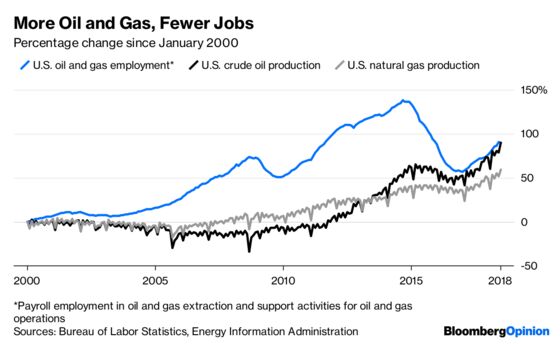 This is to some extent the way of all industry, as technological advances make it possible to produce more stuff with fewer workers. But the productivity gains in U.S. oil and gas over the past few years have been something else. The hydraulic fracturing and horizontal drilling techniques that began to unleash new riches from shale rock in the 1990s at first required inordinate amounts of capital and labor. Output per hour worked (aka labor productivity) in oil and gas extraction fell 37 percent from 2003 to 2012, according to the Bureau of Labor Statistics. Since then, it is up 108 percent.

By comparison, labor productivity in U.S. business overall is up 5 percent over that period, and in manufacturing it hasn’t budged. Productivity gains, while they can result in lost jobs, are over the long run the main driver of increases in living standards. Higher productivity equals a wealthier nation.

Some of the gains in oil and gas productivity can be chalked up to employment shifting from oil and gas companies to oilfield services providers. The BLS tracks productivity in support activities for mining, which consists mostly of people supporting oil and gas operations, and that actually fell in 2015 and 2016 (it surely rose in 2017, but that data isn’t out yet). Include this, and go back a few more years, and oil and gas no longer looks like such a productivity standout.

Still, the industry is undeniably producing a lot more oil and gas with a lot fewer workers than it was four years ago. And while all the statistics I’ve cited so far involve labor — because those are the most readily available — output has gone up relative to other inputs as well. The break-even price per barrel of oil for a new shale well in the Delaware Basin on Texas and New Mexico’s Permian oil-producing region, which I drove through last week and wrote a column about, has fallen from $70.95 in 2014 to $40.01 now, according to BTU Analytics, and in the Permian’s eastern Midland Basin, the break-even has dropped to $43.94 from $84.59 (the West Texas Intermediate crude price on Monday was $69.17 a barrel).

Economic journalists like me have been trained over the past few decades to think of productivity gains as being mainly related to how much processing power can be squeezed onto a microchip. Three-dimensional seismic mapping technologies enabled in part by better microchips have in fact played a role in the recent gains in oil and gas productivity. But so have a lot of other, much more mundane-seeming breakthroughs, from the mis-mixed batch of hydraulic fracturing fluid that got things going in 1997 to the more recent discovery that Permian sand works about as well in fracking as the sand that oil companies had been importing from Wisconsin. Productivity gains have also resulted from simply shifting more resources to the Permian and pulling back from other, less productive oil regions.

The big question with gains like this, though, is whether they are one-offs rather than the kind of long-run trends we’ve seen from computers and electronics thanks to Moore’s law. Sure, drillers have figured out how to extract oil and gas from shale with fewer workers and at less cost than a few years ago, but I’m not aware of a compelling explanation for why these productivity improvements should be expected to continue. Investors are certainly dubious, with the Standard & Poor’s 500 Oil & Gas Exploration & Production Index down 40 percent since the summer of 2014 even as actual production has rebounded. Reporter Kevin Crowley summed up some of the reasons for this skepticism in Bloomberg Businessweek last week:

Shale wells generally have explosive growth in the first few months before rapidly declining, making for production profiles very different from those of large offshore discoveries or conventional reservoirs such as in the Middle East. More and more wells will be needed. Standard Chartered Plc has dubbed the situation the “Red Queen” problem, a reference to the character in Lewis Carroll’s Through the Looking-Glass who tells Alice “it takes all the running you can do, to keep in the same place.”

Furthermore, oilfield service giant Schlumberger Ltd. is warning that increased drilling intensity runs the risk of wells being laid too close to one another, causing them to lose pressure and to flow more slowly. The solution is to space them farther apart, but that leaves behind precious crude in the rock. Operators will have to spend more than $300 billion in the next five years to meet the industry’s goal of boosting the Permian’s production by half, according to Arthur D. Little, a Boston-based consulting firm.

That doesn’t sound good! Still, given how hard it is to look into the future of oil and gas, an industry that makes a habit of defying expert predictions, it does seem appropriate to look back over the past decade-plus and take note of the fact that, in a U.S. economy that has seen only the slimmest of productivity gains, the oil and gas sector has delivered a big and almost entirely unexpected boost.

Justin Fox is a Bloomberg Opinion columnist covering business. He was the editorial director of Harvard Business Review and wrote for Time, Fortune and American Banker. He is the author of “The Myth of the Rational Market.”