By: David Long – Argus Media –  US shale producers remain determined to restrain spending until oil market fundamentals strengthen, despite record cash generation so far this year. But tight oil output is now rising, as well productivity gains deliver more supply from less investment. “We can do what we once had to do with 10 rigs with eight now in the Midland basin,” Diamondback Energy chief financial officer Kaes Van’t Hof says. “We’re decreasing the number of rigs and crews we need to execute this year’s capital plan,” and “slightly increasing our Permian oil production guidance, which should not be taken as a conscious decision to grow”, the firm’s chief executive Travis Stice says.

Output from the seven major shale formations covered by the EIA’s monthly Drilling Productivity Report (DPR) is accelerating as production from new wells exceeds legacy declines from existing wells (see graph). DPR-7 output rose by nearly 17,000 b/d in July and is expected to grow by over 31,000 b/d in August and nearly 48,000 b/d in September, the latest EIA report says. Most of the increase is from the Permian basin in Texas and New Mexico, where output rose by nearly 48,000 b/d in July, but net decline rates are also slowing across other shale regions.

Much of the output growth from new wells comes from a huge surplus of drilled-but-uncompleted (DUC) wells that accumulated in 2019 before the Covid-19 pandemic struck, as operators drilled more wells than they brought on stream. Drilling and completion activity slumped to barely a quarter of pre-pandemic levels by July last year after oil prices collapsed. But completions were the first to recover, rising to 80pc of pre-pandemic levels by last month, compared with just 50pc for wells drilled (see graph).

Shale firms completed 60pc more wells than they drilled over the past 12 months as they drew heavily on their DUC well inventory to keep spending in check. Bringing DUC wells on-stream costs about 60pc of the expenditure that was required for drilling and completing new wells in 2020, consultants Rystad Energy said. But most of the DUC well surplus has been used up and firms are now drilling more wells to offset legacy declines. Rig counts are rising faster than completion crews (frac spreads) as the balance of activity tilts back to drilling new wells in the second half of this year. The number of US onshore rigs drilling for oil is up by 13pc from the end of May, oil service firm Baker Hughes says, compared with a 4pc increase in frac spreads logged by industry monitor Primary Vision (see graph).

Most of the bigger companies remain cautious about growing output. “We have no intention of adding incremental barrels… until demand-side fundamentals improve and it becomes evident that Opec+ spare capacity is effectively absorbed by world markets,” Devon Energy chief executive Rick Muncrief says.

Publicly owned shale producers are still focused on cutting debt and rewarding shareholders. “We know investors need to see evidence that sector discipline will hold and returns on and of capital will follow… that are competitive with the S&P,” ConocoPhillips chief executive Ryan Lance says.

Investors previously saw little or no return as shale firms spent more than they earned pursuing rapid output growth. Higher oil prices exposed widely different hedging strategies among shale producers last quarter. Firms using oil price swaps or low-cost collars to protect against a weaker market incurred hedging losses that impaired cash flows. But companies that remained unhedged reaped the full benefits. “We were about 50pc hedged on crude this year, but the profile of that is 60pc first half, 40pc in the second half,” Muncrief says. “And currently, we’re about 20pc hedged as we look into 2022.” 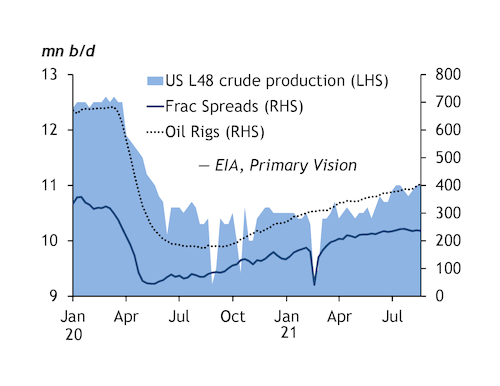 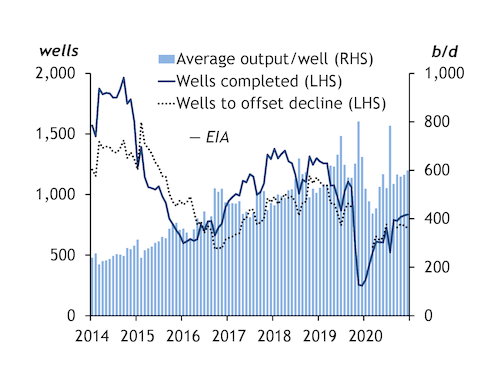 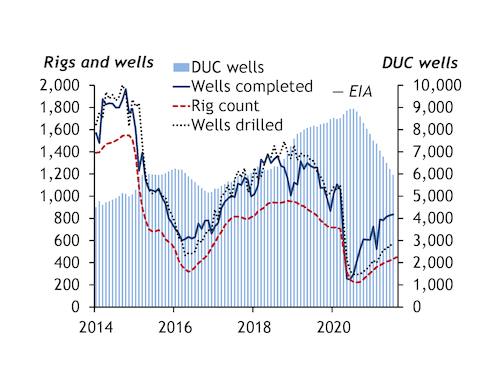