Dealing with the US shale industry’s produced water is increasingly controversial for operators, a new Rystad Energy report reveals. Even though total produced volumes are projected to hit new record highs in the coming years, treated water is expected to be comparatively lower than in the past, despite water disposal practices increasing oilfield seismic activity, with earthquakes nearly doubling in West Texas alone in 2021.

Future growth in US shale activity is tied with an inevitable increase in produced water, as hydraulic fracturing for hydrocarbon production leads to greater volumes of water. Therefore, as elevated oil prices drive shale activity in major basins, produced water levels in US onshore oilfields are set to return to the all-time-high level of 22.9 billion barrels in 2022, an 8% rise from 2021. New records are anticipated from 2023 at 23 billion barrels, further growing to 23.8 billion barrels in 2026. Fracking activity alone will rise 7% in 2022.

The trend is cause for concern, especially in the light of the boom in West Texas’ earthquake activity that Rystad Energy’s analysis of seismic data reveals. Earthquakes in West Texas of more than 2.0 magnitude almost doubled in 2021, from 1,110 to 1,929. As a result of the pressure on E&Ps to demonstrate greater ESG responsibility, the need to treat and recycle water is more prominent than ever. 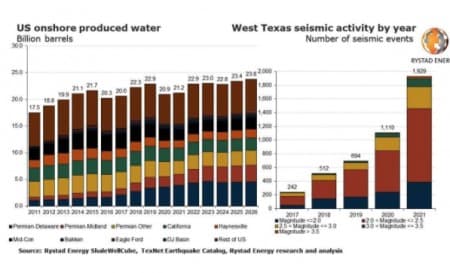 Coupled with declining freshwater availability in some of the shale basins in the US, an alternative to using freshwater in the fracking process is much sought after.

“The oilfield water market is poised for a very interesting 2022. M&A activity, regulatory responses to induced seismicity, and rising produced water volumes across the US lower 48 states have all set the stage in 2021 for what will certainly be the most dynamic market conditions in a growing oilfield segment,” says Ryan Hassler, senior analyst with Rystad Energy.

Despite the buzz of activity and investment in the water recycling segment across much of the Permian and the DJ Basin, disposal volumes are still expected to increase year-over-year through 2026. Disposed water volumes are expected to rise from 11.5 billion barrels in 2021 to 13.4 billion barrels by 2026. In most instances, SWD capacity remains abundant, with almost no bottlenecks on a basin-wide level. However, localized constraints are evident in specific areas such as Northern Culberson County or Howard and Midland counties.

Clusters of SWD wells with extreme volume and pressure utilization exist in these regions, consequently seeing an exponential rise in seismic activity. In 2021, seismic activity of magnitude 2.0 or greater increased by 74% in West Texas compared with 2020 levels, with Culberson County alone experiencing an increase of 112%. Martin, Howard, and Midland counties have also observed similar increases in seismic activity.

In response to such high disposal activity, the Texas Railroad Commission (RRC) has enforced unprecedented SWD restrictions in recent months. The first response came in September and October 2021, when the RRC identified two Seismic Response Areas (SRAs), namely the Gardendale SRA and the Northern Culberson-Reeves SRA. These regions saw SWD capacity reductions, stringent reporting guidelines, and a moratorium on all new SWD permitting for at least one year.

Doubling down on the effort, the RRC recently ordered the suspension of all disposal well permits injecting produced water into deep injection wells below the top of the Strawn Formation, and especially the Ellenburger formation in the Gardendale SRA. The action applies to 33 deep disposal wells operated by 14 operators, with a total permitted disposal capacity of nearly one million barrels. The order took effect as of December 31, 2021. Of the 33 wells, 25 are currently active, two are inactive and six have been permitted but are awaiting drilling services. Of the 14 operators, ConocoPhillips experiences the largest loss of disposal capacity, with a total of 186,000 barrels shuttered, followed by Rattler Midstream at 150,000 barrels and Wasser Operating and Fasken Oil and Ranch each with a loss of 120,000 barrels of permitted disposal capacity. SWD operators in the Northern Culberson-Reeves SRA must now wait patiently to understand the full regulatory response that may befall them after watching the fate of their peers in the Gardendale SRA.

In addition to the two SRAs, the RRC has identified three additional Seismic Investigation Regions (SIRs), which it deems are at high risk of getting upgraded to SRA status, resulting in effective capacity reductions, moratoriums on all new permits, and potential suspensions like in the Gardendale. All told, the Texas RRC has reduced the SWD capacity within the SRAs by half under the current guidelines. Operators and water midstreams including ConocoPhillips, Rattler Midstream, NGL Energy Partners, Coterra Energy, and Chevron stand to lose upwards of 50% of their disposal capacity in key acreage positions.

Although yearly growth in the recycled water market is projected to rise, produced water is forecast to grow at nearly the same pace, meaning disposal remains an essential component of the process. Given the current regulatory environment and the potential to enact even more restrictive measures, the cost of disposing of a barrel of water in the Permian Basin will likely only increase. Options exist outside of treatment, such as piping longer distances to under-utilized SWD wells in adjacent acreage or even further distances outside the basin into the central platform where minimal seismic risk exists. Of course, the cost dictates the adoption of such solutions.

The best way to hedge against regulation and cost is to invest now in the recycling network needed to handle future barrels of water. In the most recent round of sustainability reporting, many operators have been more transparent about their water stewardship, reporting standardized metrics for the investment community to analyze. In 2022, there are likely to be even more frameworks established to calculate ESG scores and benchmark operators on their water management practices, much like on emissions. Investments need to be made today to get ahead of the curve and position well for 2022.