In 2017, oil prices recovered significantly. Posting its second annual gain in a row, the commodity closed 2017 up more than 12%. The U.S. oil benchmark ended the year at $60.42 per barrel — its highest closing since June 2015.  Offshore blocks and lease sales for drilling and exploration will definitely benefit from the higher prices.

However, this wasn’t reflected in the budgeted exploration spending in 2018. The companies are still allocating capital on existing assets and ongoing developments. Oil giants like Anadarko Petroleum and Chevron have announced exploration budgets for 2018, which is lower or almost in line with 2017 figures.

The companies are not likely to initiate exploration activities unless they generate larger cash flows with higher oil prices. Only a sustainable rate of above $60 per barrel and robust results of drilling will drive exploration spending in new offshore deepwater frontiers. On the other hand, if oil prices decline, the companies’ cash flow will be dented. This will compel them to cut the exploration budgets and defer exploration drilling plans in 2018.

In 2017, most of the exploration and production (E&P) companies were struggling to cope with the bumpy oil market ride. While oil prices continue to head higher, they are way off the triple-digit territories of 2014 as prices crashed due to oversupply, the number of finds declined along with the companies’ spending budget.

Per oil-and-gas consultancy Rystad Energy, oil discoveries in 2017 totaled approximately 7 billion barrels of oil equivalent (boe), which was the lowest since the 1940s. Yes, a few more discoveries will be reported later through annual reports but the amount is not expected to increase the total by more than10%.

Rystad analysis has also found that explorers are finding fewer resources per field. In 2017, an average offshore discovery held about 100 million boe, down from 150 million boe in 2012.

In 2006, the so-called reserve replacement ratio – the quantity of proved reserves added to a company’s reserve base in a year relative to the amount of oil and gas production – reached 100%. Consequently, it fell to 11% in 2017 from 50% in 2012. It was also reported that the volume of resources per discovered field plunged in 2017.

Though the alarming figures indicate the depletion of oil reserves, it is also known that major oil producers have emergency reserves. There is a time lag between when an oil firm makes a large discovery and when it’s brought online.

It should be also considered that low resources per discovered field influence feasibility. Under the current base price scenario, it is estimated that more than1 billion boe discovered during 2017 might never be developed. 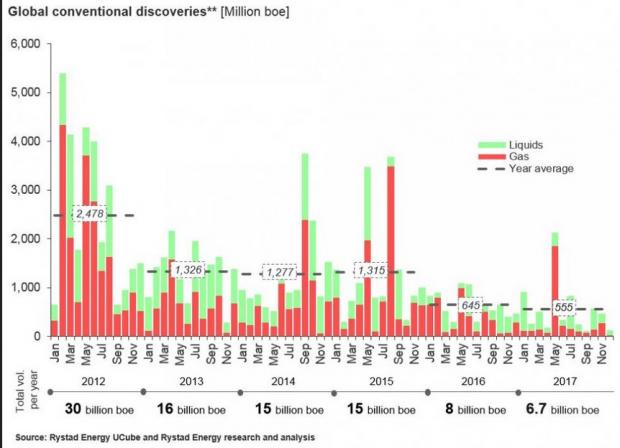 Guyana – After having spud the Liza discovery in the Stabroek Block in 2016, ExxonMobil XOM started the year with the drilling of the Payara-1 well discovery, following up about six months later with news of more oil discovered at Payara. In the meanwhile, the company hit oil for the third time in the block- Snoek.  In October, another discovery -Turbot – brought the total gross recoverable resources on the block to an estimated 2.75 billion barrels of oil equivalent (Bboe).

In 2018, two other blocks in Guyana anticipated to be spud are the Tullow-operated Orinduik Block and the Repsol-operated Kanuku Block. In September 2017, 3-D survey acquisition was completed in Orinduik, while Total SA TOT inked an option agreement with Eco Atlantic to obtain a 25% working interest of the block. In 2017, 3-D survey acquisition was also concluded in the Kanuku Block. Kanuku is seen as a good prospect for medium-sized discoveries by Repsol.

Brazil – More activity is expected offshore Brazil, which is another area that will witness activity in 2018. Subject to securing regulatory permits, work on Total’s Foz do Amazonas (Mouth of the Amazon) well, is also expected to progress. In 2017, an application to drill was rejected by the environmental regulator Ibama citing a lack of information. Per the environmentalists and scientists, the well is in close proximity to the Amazon reef. Moreover, good prospects are anticipated from Espirito Santo basin, which is likely to be drilled by Petrobras.

Mexico – Several companies like Pemex, Total and Talos Energy are thronging this region. Mexico state-run Pemex is looking at the Yaxxtaab-1 wild cat in the shallow waters of the Campeche Basin, offshore Mexico. It is known to be the first pre-salt well offshore Mexico. The company is known to have made the biggest onshore oil find 15 years back when the Ixachi well struck oil in Veracruz. Initially, the volumes were estimated at about 1.5 Bboe. Total intends to develop a wildcat in the Perdido Fold Belt.

Eni SpA E also raised resource estimates of the Amoca Field to 1 Bboe in place and the Area 1 estimated resource base to 1.3 billion barrels of oil in place.

Aruba – a wild cat well is proposed to be drilled by Repsol off this small Caribbean Island.

Namibia – In September, Tullow Oil is planning to initiate drilling on the Cormorant prospect in the Walvis Basin, offshore Namibia. While it would not be the largest well, a discovery in Namibia is considered important.

Senegal – BP plc BP will commence drilling in the Requin-Tigre (Tiger Shark) well, with Kosmos, outboard of the Tortue discovery. The find is estimated to have a potential of 60 trillion cubic feet (Tcf).

West Africa’s Mauritania and Senegal – The region is largely unexplored. It was only after Cairn Energy and Kosmos Energy, which made huge discoveries, that oil majors like BP, ExxonMobil, and others were attracted to this region. In 2016, BP partnered with Kosmos Energy in Senegal. ExxonMobil is about to ink a deal to explore oil and gas offshore Mauritania. Total bought new deepwater acreages in Mauritania in 2017. Tullow and Kosmos Energy have been present in the area for long.  The region is likely to witness active exploration and drilling in 2018.

Gambia – In late 2018, FAR intends to drill the Samo prospect. It is believed that the properties of Samoare similar to the SNE field, in Senegal. It will be the only exploration well to be drilled offshore the Gambia since the Jammah-1 well was drilled in 1979.

Nova Scotia – Beginning in the spring of 2018, BP proposes to drill a single exploration well, in the Scotia Basin, offshore Nova Scotia, Canada. BP will use the semisubmersible West Aquarius to drill the prospect, which is estimated to take 120 days.

Norway – In 2017, Statoil ASA STO drilling of the Korpfjell prospect was unsuccessful. The company plans to test another reservoir in the same prospect during 2018. Other players like Aker BP and Lundin are also active in the Barents Sea offshore Norway but the drilling results were very unsatisfactory in 2017. The companies propose to carry on exploration in 2018.

Suriname – In 2017, the region saw active exploration drilling but the companies like Tullow and Apache APA did not attain any success yet. Kosmos Energy owns two blocks – 42 and 45 – in Suriname and proposes to drill two prospects. Apache intends to drill another exploration Block 58, where a 3-D survey was done earlier this year.

Eastern Mediterranean Sea – Encouraged by the big Zohr gas discovery in the Mediterranean Sea offshore Egypt, Eni and other oil companies are expected to continue to drill for the next big find in the area, especially offshore Egypt and Cyprus. In Cyprus, Total and Eni plan to drill in Block 6 in 2018, and QP and ExxonMobil plan to drill in Block 10 in 2018.

Other areas include Montenegro, Cyprus and Portugal, where Eni is planning to drill. Total is also reviewing Papua New Guinea.

In March, Repsol and partner Armstrong Energy encountered a massive oil find in the Nanushuk Play, located in Alaska’s North Slope. The companies claimed that the discovery was the biggest U.S. onshore conventional hydrocarbons discovery in three decades with 1.2 billion barrels of recoverable light oil.

With so many prospects lined up for drilling, we believe oil supply will remain unharmed going forward. But the companies spending will largely impact the outcome, which again will depend on the sustainable oil rate of above $60 per barrel.