By: Collin Eaton and Rebecca Elliot – WSJ – A split reality is emerging for U.S. shale drillers: Those that primarily pump oil are still struggling to survive, while those that produce natural gas are slowly seeing signs of recovery.

Oil-focused fracking companies are under an extreme financial strain, as renewed concerns about the coronavirus pandemic are weighing down crude prices. But gas-focused drillers are getting a long-awaited reprieve. Natural-gas prices are climbing ahead of winter, and are less sensitive to lockdowns that erode demand for transportation fuels.

U.S. benchmark oil prices tumbled about 11% last month to their lowest level since early June, before edging up to $36.81 a barrel on Monday, as some European countries imposed new lockdowns amid a resurgence in cases of Covid-19, the illness caused by the new coronavirus. Meanwhile, U.S. benchmark natural-gas prices soared 33% last month to their highest level in nearly two years, before settling slightly lower on Monday at $3.24 per million British thermal units.

The result is a reversal of fortunes in the U.S. shale patch, where oil companies have long overshadowed their gas-focused peers. The market value of the six largest public Appalachian gas companies, including EQT Corp. and Range Resources Corp., has climbed about 18% since the start of 2020. That compares with a 53% drop in the combined market capitalization of the 25 largest U.S. oil companies, according to data from S&P Global Market Intelligence. The Ohio-based refiner reported a $1 billion quarterly loss as its fuel-making business posted a $1.6 billion loss from operations, compared with $989 million in operating income during the same period last year. The company’s pipeline business, which includes natural-gas processing and transportation, helped to offset those losses, generating $960 million in operating income, up from $919 million a year earlier. “If you compare that to the trajectory we were on, that’s at least four million barrels a day less than the pre-Covid trend,” Mr. Fox told analysts, explaining that production would likely have been up, not down, from a year earlier without the pandemic.

ConocoPhillips, one of the largest independent U.S. oil producers, reported a $450 million loss for the third quarter, compared with a $3.1 billion profit a year earlier.

The oil-price drop has clouded predictions by oil-field-services companies such as Halliburton Co. and Schlumberger Ltd. of a slow but steady pickup in fracking activity in U.S. oil regions, analysts said. Consulting firm Rystad Energy said Monday that fracking in North America likely reached a peak in October after recovery from low activity levels in May and June.

But many drillers in West Texas and North Dakota extract natural gas as a byproduct of the oil they are seeking. They had produced so much of the excess gas that they flooded the natural-gas market, keeping prices depressed for years. That pressure is expected to ease for gas producers as oil companies limit production growth, analysts said.

If oil rebounds to roughly $40 a barrel, many larger producers should be able to hold production relatively steady over the next two years while spending less than they take in from operations, according to Morgan Stanley. But $30 a barrel would result in production declines and, for some, “unsustainably high leverage,” the investment bank said. 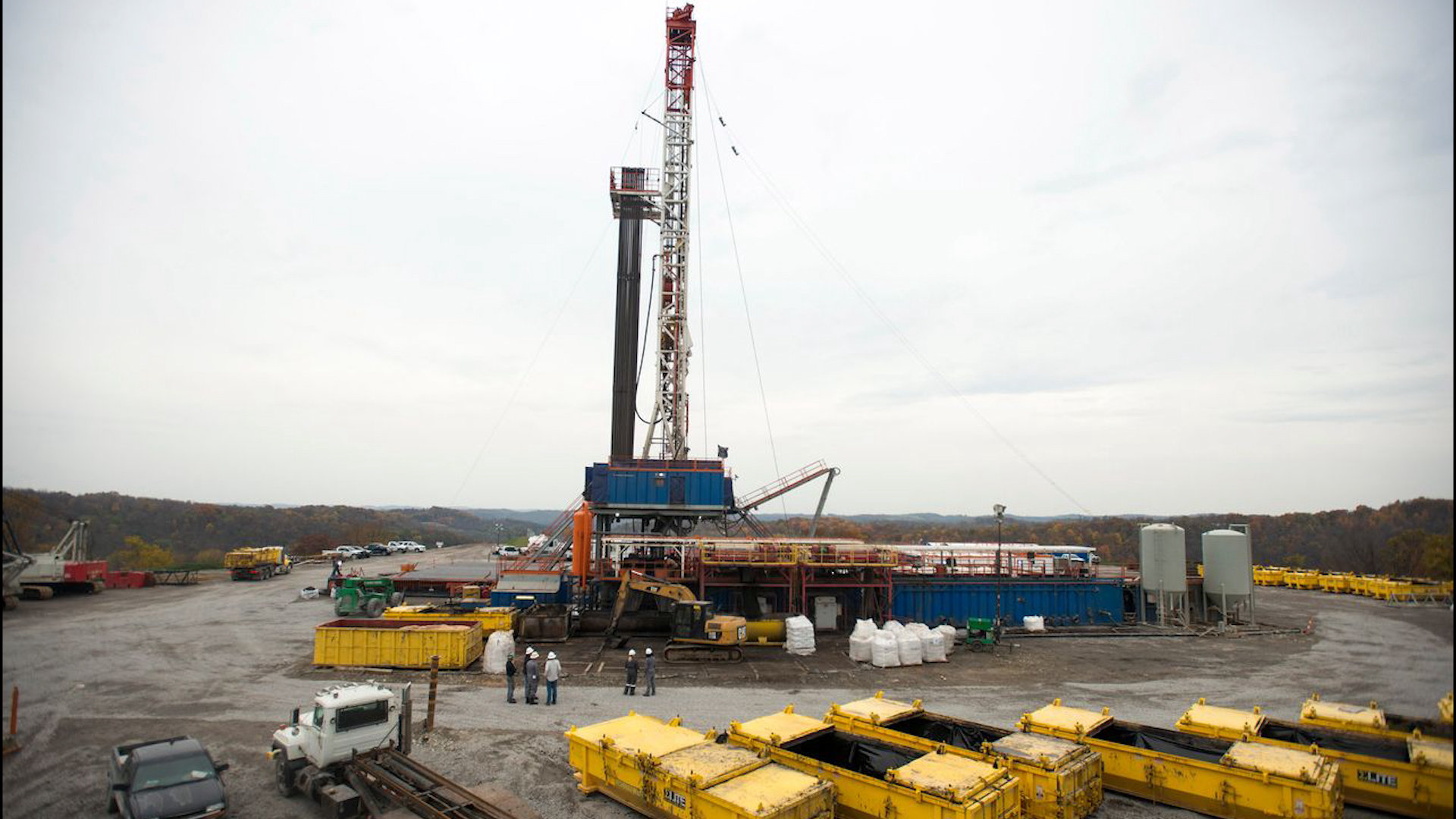 In the final weeks of the presidential campaign, the debate over fracking signaled the potentially decisive role Pennsylvania voters on both sides of the issue could play on Election Day. Photo: Bloomberg News

Even before the pandemic, oil and gas producers had been saddled with debt run up during the fracking boom. For those with weaker balance sheets, looming debt maturities are particularly problematic, said Buddy Clark, a partner at the law firm Haynes and Boone LLP. That is because refinancing is likely to be expensive as investors continue to steer clear of the oil patch.

Companies generally need to refinance at least a year before their debt comes due, lest they risk breaking terms on their debt arrangements, Mr. Clark said.

As of September, roughly $126 billion in U.S. oil- and gas-producer debt was set to mature through 2025, including about $40 billion by the end of 2022, according to an S&P Global Ratings analysis of rated companies. That wall might be “insurmountable” for some companies, the firm said, likely resulting in high default levels.

At least 248 North American producers have sought bankruptcy protection since the start of 2015, including 40 this year through September, according to Haynes and Boone.

Analysts and traders said they expect natural-gas prices to remain aloft next year amid increased U.S. exports of liquefied natural gas and as colder weather lifts domestic consumption of fuels used in residential and commercial heating.

Shares of EQT, the largest U.S. gas producer, have more than tripled from their low in February, though they remain some 86% below their 2014 high.

But even with prices above $3 per million British thermal units, U.S. shale-gas companies aren’t experiencing a windfall, said Subash Chandra, an analyst at Northland Securities Inc.

Natural-gas prices averaged about $3.31 per million British thermal units in the decade ended in 2019, according to the U.S. Energy Information Administration.

Several natural-gas drillers said they don’t plan to boost output next year, and will instead focus on generating free cash flow, funding dividends and paying off debt.

“This is not a market that’s incentivizing any growth,” Range Resources Chief Executive Jeff Ventura said last week during the company’s third-quarter earnings call, pledging to use excess cash flow to pay down debt.

Across the oil-and-gas industry, tens of billions in debt due by 2023 “has forced producers to focus on corporate returns and fixing their balance sheets rather than growing production,” Mr. Rice said.